The SHRIMP is the abbreviation of Sensitive High-Resolution Ion Microprobe. SHRIMP is an analytical instrument that the Australian National University (ANU) has begun to develop since 1973, and secondary ion mass spectrometry to analyze the secondary ions generated by irradiating a primary ion beam on the sample surface. SHRIMP has specialized in carrying out the analysis of minute areas by particular focused ion beam, and is referred to as "ion microprobe ". High secondary ion detection sensitivity and high mass and spatial resolution enable to produce reliable data worldwide.

The secondary ion mass spectrometry is a technique of analysis in microscale of sample surface. The secondary ion, which is sputtered from sample surface by a focused ion beam (primary ion beam) in high vacuum, is analyzed. Therefore, it is possible to analyze sample as a solid without chemical treatment, such as sample dissolution and column separation.

In NIPR SHRIMP laboratory, a total of two SHRIMPs (single-collector SHRIMP IIe and multi-collector SHRIMP IIe/AMC) have been installed. SHRIMP is a large system, of an ion flight distance of about 7 m and the total weight 12t. The main unit is roughly divided into six parts, namely Primary column, Sample lock, Sample chamber, Electrostatic analyzer (ESA), Magnet, and Collector.

Primary column is a part for generating and adjusting the primary ion beam to ionize atoms of sample surface. The primary ions are produced in ion source (hollow cathode type duoplasmatron or Cs ion source) and accelerated at a voltage of about 10000 V. It is adjusted by using ion optical lenses and deflectors, and then irradiated onto the sample surface. In SHRIMP, Köhler optical system has introduced into the primary column, it is enabling the formation of a homogeneous primary ion beam of 5 ~ 30μm diameter. 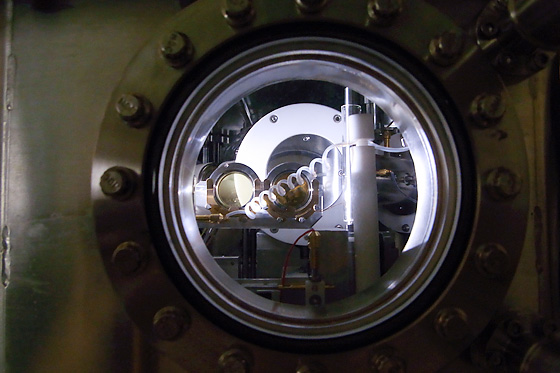 The secondary ions emitted from the Source chamber then pass through Electrostatic analyzer (ESA). Since the secondary ions with a spread energy distribution, the ESA will play a role to align its energy constant. It is an important process required to achieve the high-precision analysis.

After the secondary ions pass through the Electrostatic analyzer, those ions are introduced into Magnet. The Magnet is of curvature radius of 1m and the sector angle of 72.5° to form a magnetic field and sort according to secondary ion mass. The size of electromagnet, curvature radius of 1m, is required to exclude the isobaric interference to Pb isotopes when the slit of 100μm width of the detector is used. It is essential to obtain high-precision U-Pb ages.

Collector is a part of counting the secondary ions which are aligned with the mass number after passing through the Magnet. In the case of single-collector type, this part consists of a collector slit, a retardation lens, and a detector (electron multiplier or Faraday cup). The detector can be moved back and forth to match the focal position of the secondary ion beam. In addition, in the case of Advanced Multi-Collector (AMC), five detectors are available.

1.4.History of development of SHRIMP

Development of the new ion probe, about 40 years ago, began by Prof. Bill Compston and his co-workers at the Australian National University (ANU). Dr. Steve Clement, who was invited to the ion probe development team and contributed to design, suggested that the double focused design by Prof. Hisashi Matsuda (Osaka University) was applied. In 1980, the first SHRIMP, which was named by Dr. Clement, has been completed (SHRIMP-I). Since 1992, the ion probe started to be developed as a product by ANU and Australian Scientific Instruments. In 1993, the first unit of the product version SHRIMP (SHRIMP-II) has been installed to Curtin University of Technology (now Curtin University). Three years from then, SHRIMP-II was installed to Hiroshima University for the first time in Japan. The installation of the National Institute of Polar Research further will be in 1999 after the more three years.

※History of development of SHRIMP

SIMS enables analysis of a number of elements, isotopes of sample which is capable of being introduced in a vacuum, namely solid sample such as mineral and fossil. In NIPR SHRIMP Laboratory, we are currently operating the two SHRIMPs and taking advantage of each SHRIMP’s features. 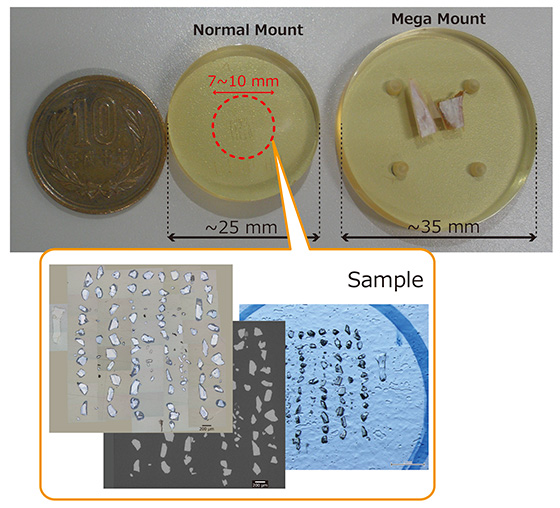 In SIMS, it is possible to analyze for thin section and resin sample, and then, it is necessary to prepare the sample in the appropriate way for each analysis. In NIPR SHRIMP laboratory, two types of epoxy resin mount, Normal mount and Mega mount, are currently available. These two types of mounts are different in size. In addition, prior to analysis, the sample is observed with an optical microscope and scanning electron microscope (SEM) for obtaining the information of the surface state, composition images and cathodoluminescence (CL) images. Finally, sample is coated with the gold deposition for the charge-up prevention.

Normal mount is epoxy resin disc with diameter of about 25 mm. For the accuracy of analysis, the samples are placed only within the circle of center 7-10 mm especially in U-Pb geochronology.

Mega mount is epoxy resin disc with diameter of about 35 mm. It is possible to embed a larger size or a larger amount of the samples compared to the Normal mount. Embedding of thin section is also possible. It uses mainly for stable isotope analysis.

One of the applications of single-collector SHRIMP is U-Th-Pb dating. U-Th-Pb dating is a type of radiometric dating method utilizing radioactive decay of U (or Th). Therefore, U-Th-Pb age is calculated on the basis of measuring U, Th, and Pb isotopes. In the case of U-Th-Pb decay systems, even when compared with other radioactive decay systems, half-life required for the measurement (decay constant) is determined with high precision. Moreover, in U-Th-Pb system, it is possible to verify the accuracy of age data by Concordia diagram because the same elements have a plurality of systems. Therefore, it is one of the powerful dating techniques. Material which is rich in radioactive elements, U and Th, and also poor in the daughter nuclide, Pb, is suitable for U-Pb dating. Therefore, minerals, such as zircon, titanite, and monazite are used. Also, it is possible to analyze the abundance and isotopic composition of trace elements other than U, Th, and Pb. For example, rare earth elements in zircon, titanite, apatite, and garnet, and Hf abundance and Ti isotopic composition are available.